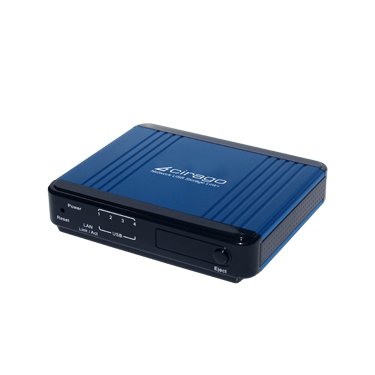 Time to take a break from constant Google propaganda.

This week I want to talk about a very cheap and versatile device that serves as both a personal cloud and a home media server.

The device in question is a Ciragolink NUS2000. It’s a tiny blue box. Doesn’t look like much but it does a lot for what it is.

If you want a low priced network attached storage solution for home or a small office situation, it’s ideal.

For some people it may not have all the bells and whistles they desire, but I think that what it does for the price makes it one of the best value for money products I have seen for its particular niche.

It has 4 USB slots and a network slot. To make it into a network attached device, simply plug it into you network router and it’s on your network.

Into the four USB slots you can plug either portable hard drives or printers.

The device will support hard drives of up to 2 terabytes in size, so if you have 4 hard drives you can have 8 terabytes of storage available. Once the device is plugged into your router, the hard drives are visible to network devices, so right away you have network attached storage.

If you plug in a printer, you have a network printer.

In addition to this you also have a media server

For those who aren’t familiar with the term (I would imagine there are some out there who aren’t; can’t assume everyone is totally tech savvy) this means that you can stream movies and music from the device to your TV (provided of course your TV is internet connected). Very handy in this day and age.

Finally, it acts as a personal cloud

I have discussed the concept of the cloud before. It’s a rather mystical term (computer people are fond of making their stuff sound mystical) but simply means resources such as files or applications that are kept in an internet accessible place.

In the case of a personal cloud, this means that you are the one hosting your own data. The way it works is simple. The device is given a web address and you can access that device from anywhere in the world using a WebDav client.

In this connected world it is a great convenience to have all of you personal files accessible whenever and wherever you are.

You can buy an NUS2000 here. They are only 80 US dollars so it’s not bad for what it does (Hard drives not included).

If you want to compare prices, have a Google search for NAS. You’ll find there is no other device about that does what this does for the price.

Disclaimer: I don’t get paid to promote this device. I just own one, I like what it can do and thought some people out there in reader land might be interested to hear about such a neat solution.