Politicians. They’re a funny bunch. I don’t mean funny ha ha either. I mean funny odd. From the weirdos who play student politics at university to running the country. And we, the people, let this sorry state of affairs continue.

One thing about politicians is that their biggest concern is re-election. When opinion polls are bad, they might trot out old cliches like, “the only poll that matters is the one on election day” and the like, but they do take notice.

Recently in Australia we have had the situation where the speaker of the house, Bronwyn Bishop was forced out of the speakers’ position because of an expenses scandal. You would have to have been hiding under a rock if you were in Australia and didn’t know this, but for the benefit of people reading this who are not from Australia (I’m talking to you Indian web developers) here’s a recap.

Rather than go the 70kms from Melbourne to Geelong by car for a party fundraiser, Bronwyn saw fit to bill the Australian taxpayer five and a half thousand dollars for a helicopter flight. It shows, politicians rorting expenses is a common problem, no matter where you live. At least she didn’t get her moat cleaned like one British politician, though I’m sure if she had a moat she would.

Not surprisingly, the Australian public thought this was a bit beyond the pale. And in this day and age of social media, they did what any right thinking, apathetic population would – they took to facebook and twitter. No marching in the streets for this generation. It’s too damn cold; it gets as low as 12 degrees celsius outside in the middle of winter here. Yes I know the English are saying.. 12 degrees.. it’s warming up, but not us. It’s cold here when it’s 12. We even have to wear socks.

Memes started appearing. When you choose to take a helicopter rather than a car it’s just too easy to poke fun. 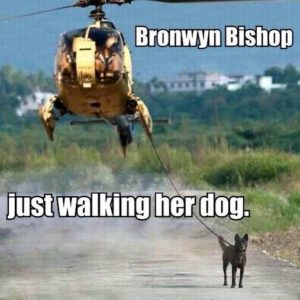 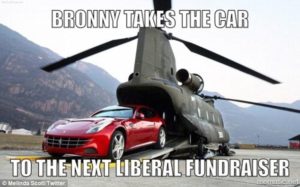 Now with most political scandals, politicians just like to tough it out. Give it a couple of days and the papers get bored , or some famous dies and they are onto new territory. Not this time. It wasn’t helped by more and more revelations of her extravagance, but I contend that without the social media backlash, it would have been easier for it to go away.

The thing is, the memes brought this to the attention of people who normally aren’t interested in politics, and kept it there. I contend there is no worse sin for a politician than this. Once people who normally go, “Don’t talk to me about politics, it’s boring”, say, “what about that idiot, Bronywn Bishop?” it’s all over.

Pretty much summed it up. We have entered an era where social media can give politicians direct insight into what the people are thinking. It would be nice to use this power to shape the decisions more substantial than whether or not a politician travels by helicopter, but unfortunately I don’t think we have progressed that far yet. There is always hope though.

The scandal has it’s own hashtag #choppergate (please, when are they going to give up on adding a ‘gate’ to the end of every scandal?) and even made the UK papers – the Daily Mail’s coverage.

And recently I wrote about how social media can bite the unwary.