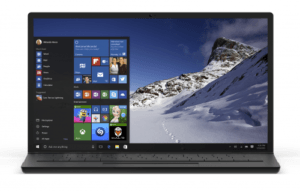 The big tech news of the last week is that Microsoft have announced that Windows 10 will be released on July 29.

My opinion on this is good luck with that. I have been playing with Windows 10 for a couple of months now. I think there are still plenty of things to fix up before they are ready for this and that release date is not far away.

Be that as it may, that is the day they have announced. In case you weren’t aware, they are providing it as a free update to Windows 7 and above.

Why are they doing this? Market share is the obvious thing. I have written before about how the rise of the tablet and internet browsing on phones has really hit Microsoft’s market share as far as devices with their operating systems installed.

Tablets and phones are largely running Android or Apple’s IOS. Microsoft needs to make inroads into that market. Windows tablets are a distant third. Whether they can improve that share remains to be seen.

But why is market share of an effectively free product important? One word. Apps. The rise of Microsoft can be tracked back to the dominance of their apps, primarily their office suite of apps. When you are sending a document via email the standard directive is “Can you send that in Microsoft Word Format?”

Yes there are other office suite offerings, but there is no doubt that Microsoft Office is the de facto standard.

But back to Windows 10. Is it worth upgrading to? I think the jury is still out on that. I am currently on the bleeding edge of technology by using a pre release version of the product. I know that’s not ready, without a doubt. But the finished product? Yeah I guess it will be ok. It will look pretty. For a tech geek it’s always fun to refresh the look of your PC.

Mind you, these days, I think Google got it spot on with their Chromebook. A Chromebook is Google’s low price, stripped down laptop offering. It’s largely just a platform for a web browser. I don’t think they got the market’s desire for the product right, but you can’t fault their logic.

Think about it. Eighty percent of the time I spend on the computer these days is spent using the browser. It is almost completely irrelevant what the operating system behind the browser looks like, because Chrome still looks the same. It is for this reason why Windows XP, a product that Microsoft retired a year ago still has more market share than Windows 8 and 8.1 combined.

Anyway when it comes out, Google “Windows 10 download and take it from there. As always, if you need technical help, get in touch.