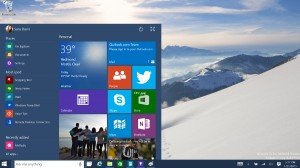 I’m a geek when it comes to technical stuff. So when I found out I could have a look at the Windows 10 technical preview, I was excited.

I downloaded the preview and decided to install it (after backing up all of my important files that is).

Here’s how it went.

Firstly expect to wait a LONG time. This update is going to see your computer out of action for several hours (several meaning at least 4 probably more).

Unfortunately so far I have found at the other end, things aren’t quite ready yet. Which is a shame, because I am really impatient. I want Windows 10 on my system badly.

The interface is fantastic.

I’m a web designer, I love computer interfaces. And of course new interfaces make everything seem special. Your tired looking old computer gets a new lease of life.

But… There are too many bugs at the moment.

This is to be expected of course. This is not a production version. Software companies release these things in this way to iron out the bugs.

My experience was that the product at the moment is quite unstable. After installing it and starting it, it took me three attempts at logging in before it didn’t crash on me within the first five minutes. I repeatedly got the message “you don’t have permission to run this” when attempting to open a program.

I needed to update my mouse driver, but when I tried to, the installation didn’t work. But worst of all from my perspective was when I tried to work on WordPress website I am creating, I got the message “Error establishing a database connection”. I’m sure I could have troubleshot this if I had the inclination but to be honest it’s just not ready.

Time to roll back, put up with Windows 7 for a little bit longer. A beautiful interface is a nice thing but not at the cost of error free running. Apparently it’s slated for release later this year. Of course having been in the industry for a while I know that what they say and what ends up happening are two different things.

On the plus side the rollback to Windows 7 was fast (about 15 minutes) and trouble free.